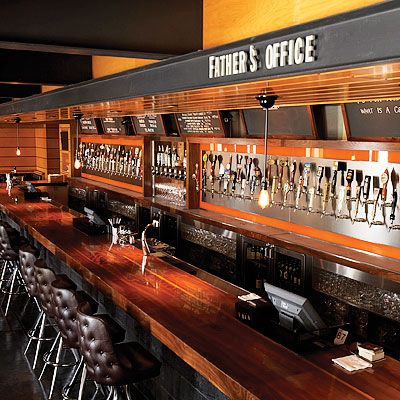 Neighboring to very busy Melbourne Central train station, in a small lane way, resides one of the coolest pubs/bars/bistro in the city. Until you climb the dark stairs, no one would believe the place has this much space with a separate restaurant and a quite spacious bar. Also the city skyscrapers looked so close to you, and during the night time this place becomes one of the best hangouts in the city.

We decided to start in the restaurant for dinner and then catch-up with some friends for drinks in the bar. To start with we ordered beer and cider from the tap and surprisingly most of them are made locally. There were vast verity of drinks to select from cocktails to spirits to punch bowls. 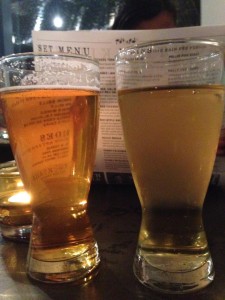 Menu looked really tempting and there was an option of selecting set menu or an a la carte menu, so we decided to order few dishes to share. Whole crumbed Camembert was shallow fried and served with a sweet house made beetroot chutney and crusty bread which was oozing out when you cut it. Melt in your mouth pork belly served with crispy crackling, house made honey cider dressed wild roquette and pear and apple compote.

We wanted to try their well-known chicken wings (as for the menu), so we decided to go for Buffalo wings and Louisiana fried Wings. Marinated Buffalo wings came with a tasty blue cheese dressing and house made chipotle mayonnaise was served with Louisiana fried wings. They tasted good but did not have the wow factor like the other two dishes we ordered.

After that we moved to the bar and ordered more drinks. We started with ‘Berry Guns and a fast car outta here’ a punch bowl. All the punch bowls seemed to be good value for money costing $39 each and serves 12. It was delightful and made out of Port, creme de mure, sweet vermouth, orange juice, pale ale, blackberries, raspberries, candied fruit.

The staff was friendly and the atmosphere was inviting and I’ll definitely go back.